Posted on February 14, 2020
Tenebrio feed starter (low cost production method for Tenebrio feed)
Tenebrio also known as breadworms, native to North America, introduced from the Soviet Union in the 50th century to feed our country, Tenebrio molitor is a juicy soft body, fat content of 30%, protein content of up to 50%, in addition to phosphorus, potassium, iron, sodium , aluminum and other major elements and a variety of trace elements and animal growth necessary for the 16 kinds of amino acids, amino acids up to 847.91 mg per 100 grams of dry products, its various nutrients in all kinds of feed first. According to the breeding and determination, the nutritional value of 1 kg of Tenebrio equals to the nutritional value of 25 kg of wheat bran, 20 kg of mixed feed and 100 kg of green fodder, and is known as the â€œtreasure house of protein feedâ€. According to tests conducted by relevant units, it is the best feed for breeding spiders, cockroaches, scorpions, snakes, and poultry and livestock. Because Tenebrio larvae contain about 40% of protein, indole contains 57%, adults contain 60%, and dry larvae contain 70% of protein. Therefore, it has been proved that the use of Tenebrio as a food material can accelerate their growth and development and increase the reproductive rate, as well as disease resistance. With the use of Tenebrio molitors, the survival rate is over 95%. Can increase 0.3 times, feeding livestock and other animals, its reproduction rate greatly improved. As Tenebrio contains high levels of protein, amino acids, fats, carbohydrates, and other nutrients, it is easy to keep up with sweaty software and strong viability. Therefore, it was selected as a good feed by the national zoo and local farms.
The main feed of Tenebrio molitor is wheat bran, which can also be supplemented with glutinous bran (corn flour is too fine, airtight, and can not be used as feed for Tenebrio molitor). The vegetables are mainly cabbage, radish, Ganlan and other leafy vegetables. These feeds can meet the needs of parasites for protein, vitamins, trace elements and moisture. In order to purify the rejuvenating population and speed up the propagation, a small amount of glucose powder, fish meal, etc. can be added to the feed. Every 0.5 kg of mealworms can eat 1.5 kg of wheat bran and 3 kg of vegetables in a generation cycle. In fact, in the production of Tenebrio feed, there are many techniques to save feed costs, such as the use of Kinpo feed starter fermentation of straw, corn meal, bran and other roughage into high quality Tenebrio feed.
The golden babe-type feed culture starter is a compound micro-ecological preparation rich in bacteria, filamentous bacteria, yeasts, and actinomycetes, and can quickly and efficiently convert crude feed ingredients into small peptides and amino acids through the life activities of microorganisms. High quality feeds such as nutrients. Next, I will explain the fermentation process of Tenebrio foetida fermentation with the legendary method.
Preparation: According to the weight of the material to be fermented, one-thousandth of the prepared goldfish type Tenebrio molitor feed preparation (such as more difficult to ferment bark, rice husk, etc. can be increased by the appropriate amount); with fresh rice bran (Note: "rice bran" It is not "reunification", the nutrition and breathability of rice bran are good, and old rice bran or untied nutrients are poor, and both are unfavorable.) The starter is diluted (5 kg of rice bran per kilogram of goldfish fermentation aid) and then diluted. Good Golden Baby's fermentation aids are mixed evenly with other accessories such as pre-wetted straw powder and then evenly mixed into the main ingredients. Straw powder: Ingredients (wheat bran + rice bran + corn flour) = 60%: 40% (depending on the size of animals, their own requirements and different growth stages, the level of nutrient requirements is respectively 40%: 60%, 50%: 50%, 60%: 40% adjustment).
Moisture regulation adjusts the moisture to 60-70%. The water content is too low, which is not conducive to the rapid reproduction of functional microorganisms. The fermentation rate is slow. The water content is too high, not only the temperature rise is slow, but also the local anaerobic environment may be caused by the poor ventilation. "Produce odor by breeding. Whether water is suitable or not is determined by grasping a handful of material, see the watermark but not dripping.
Overturn: When the temperature of the material rises to about 70Â°C, it can be turned over for the first time and turned over again in 3-4 days. It can not maintain the high temperature above 75Â°C for a long time, otherwise it will cause a large loss of nutrients in the culture medium and affect the output. In the later period, according to different requirements, measures such as withdrawing the covering, increasing the density of punching holes, replenishing the water, reducing the height of the pile, and tipping over are separately adopted to control the temperature within an appropriate range.
Humidification: With the rapid increase in the temperature of the material pile and the constant accumulation of heat, the moisture in the material will be lost by evaporation. Therefore, at the same time, it should be filled with water according to the specific situation (0.5% lime water is preferred). The last replenishment and turning should be completed at the same time. When sowing should be avoided as much as possible to avoid the "raw water" added, so as not to cause the strain "not to eat" after sowing.
Completion: It takes about 7 days to ferment; the fermented surface is covered with white hyphae, and there is no aroma of ammonia, no stickiness and elasticity, and straw straw is pulled lightly, indicating that the fermentation is completed. The fermented feed can be fed directly.

This obstetric examination bed is suitable for obstetrics and gynecology for parturition;

also suit for after the birth of observation and implementation of gynecological examination, diagnosis and operation;

The exam table is easy to operation, table up and down by electric control, back plate controlled by gas spring; 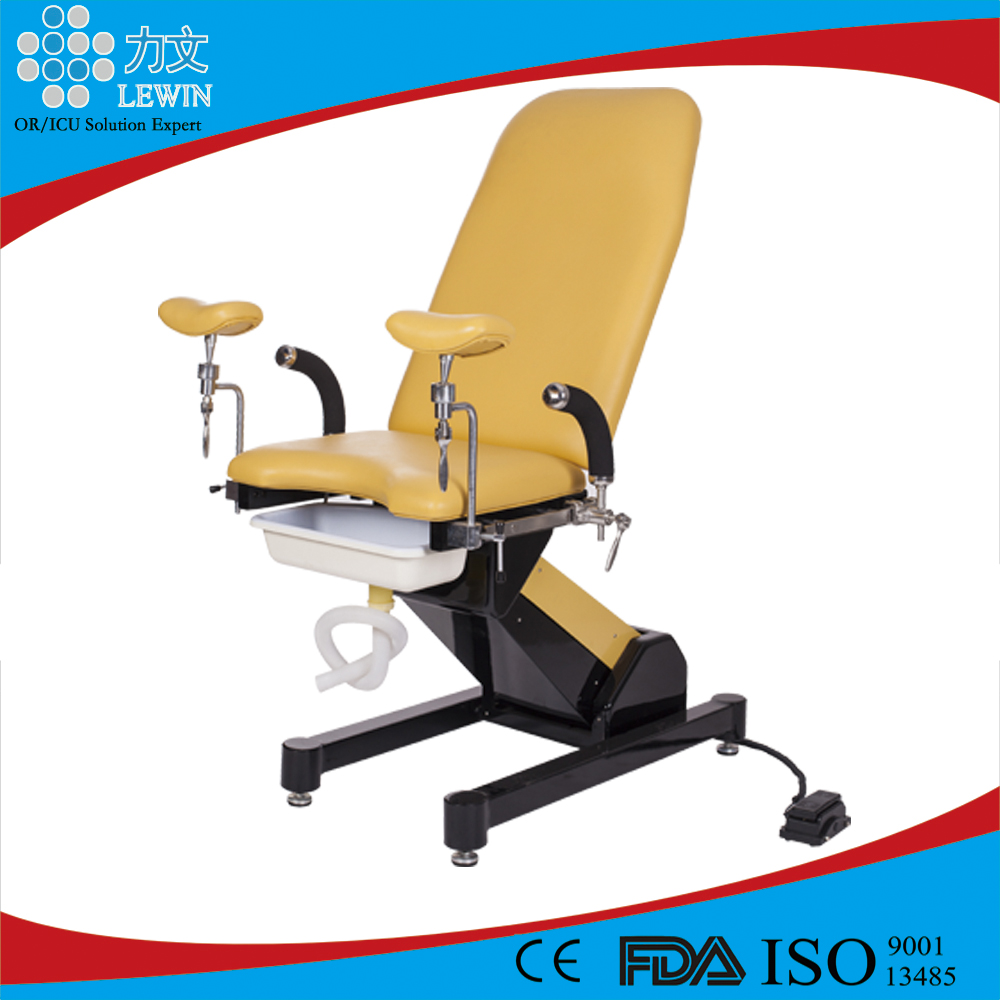